The Ark of the Covenant

The Ark of the Covenant had significant meaning to God’s people in the Bible. What meaning does it hold for us today?

The Ark of the Covenant means different things to different people. For some, the ark is a mystical object that contains supernatural powers too terrifying to comprehend. For the pop-culture minded, it is the priceless treasure sought after by the

fearless Indiana Jones in Raiders of the Lost Ark. To others, it is an ancient artifact that is highly coveted because of its religious significance, similar to the Holy Grail. With all the societal myths surrounding the ark, it’s worthwhile to investigate its true origin and purpose. Is the Ark of the Covenant as powerful and terrifying as some have portrayed it to be? Is it merely something dreamed up by Hollywood to lure our movie-going dollars? Or could there be more to this ancient object that has relevance for us today?

The Ark of the Covenant is first mentioned in the Bible in Exodus 25. Following Israel’s deliverance from slavery in Egypt, God instructed Moses to build a Tabernacle (or tent) in which the Israelites would worship Him. Placed in a special area known as “the Holy of Holies,” the Ark of the Covenant was the most sacred object in the Tabernacle. Detailed instructions were given by God about how to construct the ark. It was to be made with acacia wood and overlaid with gold. It was to be 2.5 cubits long and 1.5 cubits wide and high (1 cubit is approximately 18″). On top of the ark were two gold cherubs that stood with their wings covering an area of the ark known as the “Mercy Seat.”

The Ark of the Covenant contained three items of extreme significance to the Israelites. The first was two stone tablets bearing the divine inscription of the Ten Commandments. The Ten Commandments formed the foundation of God’s covenant with Israel, commonly referred to as “The Law” (Exodus 31). The second item in the ark was the rod of Aaron. God miraculously caused Aaron’s rod to bud with blossoms to show the rest of the tribes of Israel that it was God’s will for Aaron to be in charge of the priesthood (Numbers 17). The last item was a golden pot of manna. Manna was the sweet-tasting wafer-like “bread” God had miraculously provided for the Israelites during their 40 years of desert wanderings (Exodus 16).

The Jewish scriptures do not record exactly what happened to the Ark of the Covenant. Tradition says that the prophet Jeremiah took the ark and hid it in the catacombs beneath the temple as the Babylonians were laying siege on Jerusalem in 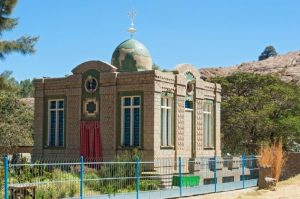 586 B.C. Rabbis Shlomo Goren and Yehuda Getz believe it’s still there, hidden beneath the Temple Mount and accessible through a series of underground passages. The Temple Mount is currently home to the Islamic “Dome of the Rock,” so excavations are impossible.

Some believe Jeremiah hid the ark in or around Mt. Nebo on the Jordan River’s east bank. In the apocryphal book of Second Maccabees, chapter 2, verses 1-8, we read how the prophet Jeremiah “following a divine revelation, ordered that the tent [i.e. the tabernacle of meeting] and the ark [i.e. the Ark of the Covenant] should accompany him and how he went off to the mountain which Moses climbed to see God’s inheritance [i.e. Mt. Nebo; see Deuteronomy 31:1–4]. When Jeremiah arrived there, he found a room in a cave in which he put the tent, the ark, and the altar of incense, then he blocked up the entrance.”

Graham Hancock, a former East African correspondent for the Economist, believes that the ark may be housed in the Saint Mary of Zion Church in Axum, Ethiopia. Hancock published The Sign and the Seal: The Quest for the Lost Ark of the Covenant in 1992, in which he presented his theory. Robert Cornuke, an investigator with B.A.S.E. Institute, has pursued this theory with multiple expeditions over the past few years.

A recent theory has surfaced in light of the mysterious Copper Scroll. This scroll was discovered among the Dead Sea Scrolls in the 1950s and appears to be a treasure map. Vendyl Jones believes that the recently discovered Scroll leads to the exact location of the Ark of the Covenant. According to Vendyl, the ark is hidden somewhere in a “cave with two columns, near the River of the Dome.”

Regardless of its location, Jewish tradition says the Ark of the Covenant will remain hidden until the day the Jewish temple is 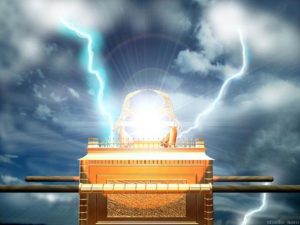 Similarly, the New Testament scriptures indicate that the ark will be rediscovered in the end times:

“Then God’s temple in heaven was opened, and within his temple was seen the ark of his covenant. And there came flashes of lightning, rumblings, peals of thunder, an earthquake and a great hailstorm” (Revelation 11:19).

What do you believe about the Ark of the Covenant? Is it just a Hollywood prop, a religious trinket, or a powerful truth? Investigate the matter and decide for yourself!